Amazon rainforest fires: What you need to know - The Washington Post

As Brazil and the world mobilize soldiers and finances in response to a wave of wildfires in the Amazon, far more is at stake than Brazil’s international reputation.

The Amazon — nearly four times the size of Alaska — is a vast sink for storing carbon dioxide and a key element of any plan to restrain climate change. Any increase in deforestation there would speed up global warming as well as damage an important refuge for biodiversity.

Studies show the 2.2 million-square mile rainforest in the Amazon is nearing a tipping point, at which large fragmented portions of the rainforest could transform into an entirely different, drier ecosystem, leading to the acceleration of climate change, the loss of countless species and disaster for the indigenous populations that call the tropical rainforest home.

What does the Amazon have to do with the fight to slow climate change?

“The Amazon forest holds something like 90 billion tons of carbon, and if that ends up in the atmosphere it’s not a good thing,” says Thomas Lovejoy, senior fellow at the United Nations Foundation and professor of environmental science at George Mason University.

Paulo Moutinho, senior fellow at the Woods Hole Research Center, says that would equal a decade’s worth of global carbon emissions at current rates.

“It’s a big number,” Lovejoy says, and the destruction of the rainforest would turn the Amazon into grasslands and savanna.

A fire burns trees and brush along the road to Jacunda National Forest, near the city of Porto Velho in the Vila Nova Samuel region, which is part of Brazil's Amazon. (Eraldo Peres/AP)

What caused the recent outbreak of Amazon fires?

Unlike the United States and Canada, where many wildfires are ignited by lightning strikes during the summer, large fires are not a typical, natural occurrence in the Amazon, particularly during non-drought years such as this one.

Instead, most fires in the Amazon are caused by humans, set either accidentally or intentionally.

Brazil’s National Institute for Space Research found the country has lost more than 1,330 square miles of forest cover to development since January, when President Jair Bolsonaro took office. That is a 39 percent increase over the same period in 2018. July in particular featured a huge spike in forest loss, with an area larger than the city of Los Angeles lost in a single month.

Who would want to harm the Amazon?

The biggest economic interest groups eating away at the Amazon are cattle grazers and soybean growers. “Directly after deforestation, mostly what we see is pasture,” said Mikaela Weisse, a fellow at the World Resources Institute. Later, soybean growers expand by taking over pasture lands.

Mining, timber and development firms are also eyeing the region for expansion, encouraged by Bolsonaro’s election.

Scientists are working to discern how many of the fires are burning on the border of deforested land that had been previously cleared to make way for cattle grazing or growing crops, especially soybeans.

Weisse says satellite photos show a “special pattern where we see a lot of fire hotspots clustered around roads, agriculture and pasture areas that have already been cleared. This confirms the idea that it’s mostly due to humans.”

Is this year's surge in fires unusual?

In the first eight months of the year, the number of fires in the Amazon has climbed to 156,000, the highest number since 2010, according to the Global Forest Watch.

Before that some years were worse than the current one. The Global Forest Watch’s records go back to 2001, and the number of fires was greater in 2002-05 and 2007. That is why international efforts — led by major donors Norway and Germany — pressured Brazil to change its policies.

Brazil’s government took action in 2004 and again in 2012 to discourage runaway deforestation — and in large part it succeeded. It bolstered law enforcement, protected more lands and penalized counties that did not reduce deforestation rates. Private companies also pledged to eliminate agricultural products raised on deforested lands from their supply chain.

From 2005 to 2014 deforestation rates dropped by 75 percent, Carlos Nobre, a senior researcher at the University of Sao Paulo, said in an email. “That was the greatest reduction in CO2 emissions on the planet,” he said.

In 2015, then-President Dilma Rousseff pledged to restore 46,332 square miles of Brazil’s forests — an area about the size of England — by 2030 while it also pursues “policies aimed at eliminating illegal deforestation.” 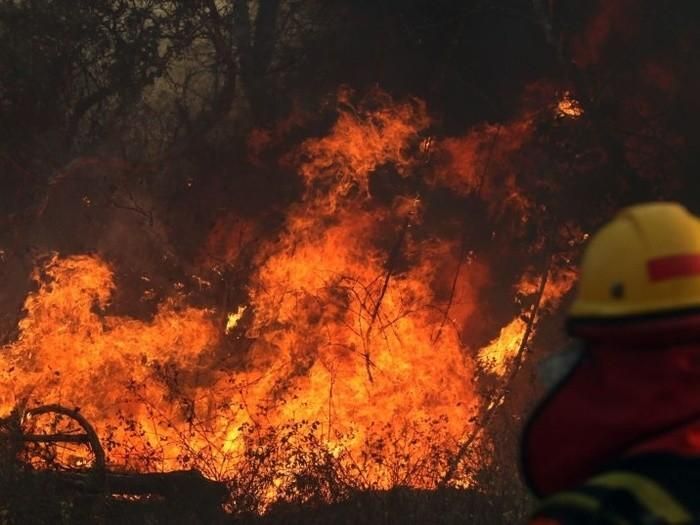 But emissions actually increased instead, Nobre says, knocking out any chance of Brazil meeting its Paris accord targets of reducing annual rates to less than 1.2 thousand square miles by 2030.

Now Bolsonaro sees the Amazon as a place to develop, including a series of environment-altering dams. Roads and human settlement will follow. “Let’s use the riches that God gave us for the well-being of our population,” Bolsonaro said on a visit to the Amazon, where he proposed opening up an ecological reserve to mining.

Brazil initially spurned international community's offer of $22.2 million to fight the fires. Would it be enough?

Fighting thousands of fires in remote areas is an extremely challenging task that is likely to require thousands of people and many aircraft.

The cost of fighting wildfires in the American West last summer, where there are far more structures at risk, ran into the hundreds of millions. So a commitment of $22.2 million is largely a symbolic down payment and an expression of global concern. It will take far more money to put these fires out and, more importantly, prevent new ones from flaring up as farmers and ranchers seek to burn felled trees during the rest of the dry season.

As it stands, a feud erupted between French President Emmanuel Macron and Bolsonaro, who has said he would not accept any money until he gets an apology from Macron.

Is Brazil the only Amazon country seeing an uptick in fires now?

No. Fires are burning in other parts of the Amazon as well as other forest ecosystems in the region, including Bolivia, Paraguay and Peru. But most of the international attention has been focused on Brazil, which contains about 60 percent of the Amazon rainforest.

How long have fires been burning in the Amazon and what will it take to extinguish them?

The most recent fires in the Amazon broke out suddenly in early August, with a spike recorded by satellite imagery and reports from the ground during the first two weeks of the month. This coincides with the start of the dry season, which tends to last through October, as well as the typical surge in slash and burn agricultural operations. But scientists say the dry season, an annual event, has not been unusual.

As for what it is going to take to put out the fires, that is unclear. The sheer number of fires presents a huge challenge, though many of the fires are concentrated along existing roadways.

“The fire is a consequence of deforestation and if you’re not going to address this deforestation you are just going to make some treatment that doesn’t make any kind of effect in the long-term,” he said.

What's all the fuss about 'fake' photos posted on social media?

Several viral images circulated on social media were not actually from this year, but from earlier years. For example, actor Leonardo DiCaprio, whose foundation works on rainforest conservation, shared a photo that was found to be from a stock photo catalogue taken as long ago as 2003. Macron and Greta Thunberg, the Swedish student climate activist, used the same photo. Soccer star Cristiano Ronaldo posted a different photo from an earlier year.

But some only saw those errors as evidence of the long-running problem. After posting an image from Aug. 19, 2019, one reader tweeted “They’re still burning!!!”